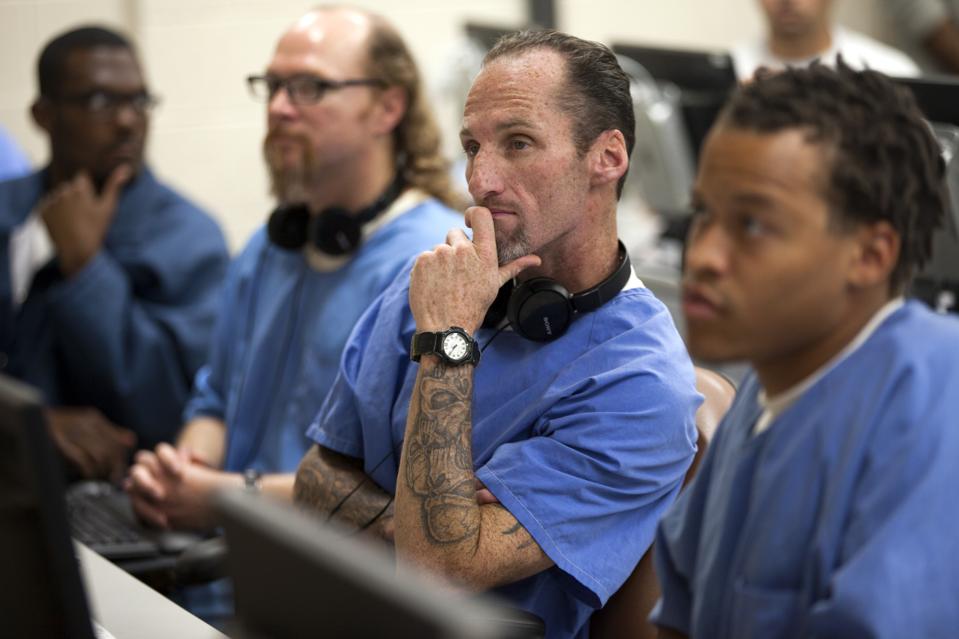 SAN QUENTIN, CA— SEPTEMBER 27: Inmates serving time at San Quentin prison learn how to code as part of The Last Mile program, on September 27, 2016 in San Quentin, California. Inmates learn a skill – coding – that can ensure they will get good-paying jobs when they are released. The governor says he will reduce the prison population by 30% in two years. (Photo by Melanie Stetson Freeman/The Christian Science Monitor via Getty Images)

Later this month, professors Chris Surprenant (University of New Orleans) and Jason Brennan (Georgetown University) will release their new book on mass incarceration, Injustice for All: How Financial Incentives Corrupted and Can Fix the U.S. Criminal Justice System.

The numbers, Surprenant reminded me in a recent interview, are staggering. At the beginning of 2019, around 2.3 million people—one out of every 140 people—were locked up in U.S. jails and prisons. “This prison industrial complex,” says Surprenant, costs American taxpayers “$182 billion annually to support everything from policing to prison service providers to the judges and courts.” That figure climbs even higher, he observed, when we factor in $33 billion a year in lost labor productivity.

“These large numbers should be a concern to any and all Americans,” Surprenant said. “Beyond the financial cost is the social cost to many of our communities,” especially, Surprenant noted, communities of color.

And then there’s the effect on the incarcerated individual him or herself. Studies on the effects of incarceration show that even a short stint in prison can have a negative psychological impact on a person. In a 2001 paper commissioned by the Department of Health and Human Services, social psychologist Craig Haney found that “the process of prisonization involves the incorporation of the norms of prison life into one’s habits of thinking, feeling, and acting.” Once released, Haney observed, “the continued embrace of many of the most negative aspects of exploitative prisoner culture is likely to doom most social and intimate relations, as will an inability to overcome the diminished sense of self-worth that prison too often instills.”

For those of us who believe in the liberal ideal—that anyone, regardless of the circumstances of his or her birth, can flourish—the social cost of mass incarceration is deeply troubling. In Surprenant and Brennan’s book, which suggests ways to reduce the scope of what’s considered criminal activity and change perverse financial incentives that lead to overcriminalization and excessive punishment, we can find hope for the long-term future.

But in the shorter term, how should we address the social cost of the 2.3 million currently incarcerated?

The powerful new PBS miniseries College Behind Bars—directed by Lynn Novick, produced by Sarah Botstein, and executive produced by Ken Burns—suggests we might find hope in the transformative effect of higher education. The miniseries follows New York prison inmates who are pursing liberal arts degrees through the Bard Prison Initiative, a program of Bard College. The episodes can be streamed free on PBS.org.

“What college does, it helps us learn about the nation,” inmate Rodney Spivey-Jones says in the miniseries. “It helps us become civic beings. It helps us understand that we have an interest in our community, that our community is a part of us and we are a part of it.” In the fourth episode Spivey-Jones participates in Bard Prison Initiative’s winning debate against the Harvard University debate team. He also discusses his senior project, a research project on how discourse shapes perceptions of equality.

John Gonzalez, another inmate, explains the process of learning as “putting words to systems that you’ve recognized your whole life but never had a word for. Right? [Like] hegemony or alienation.”

Throughout the miniseries, the camera sits in on classes and writing workshops where students discuss Moby Dick, Hannah Arendt, King Lear, and Plato’s Republic. In an op-ed in USA Today, former inmate and Bard Prison Initiative graduate Giovanni Hernandez says his academic journey “was like emerging from Plato’s cave.”

“My education trained me to think critically, to challenge conventional wisdom, to spot inconsistencies, to interrogate my own opinions and ideas,” Hernandez writes.

What better reminder of the liberating power of higher education than to hear incarcerated men and women describe their experience? For their crimes the students of the Bard Prison Initiative have lost their liberty and been removed from civil society; but through a liberal arts education, they have developed new relationships with history and philosophy, figures living and dead, and the agency required to form conclusions of their own. And those developments empower incarcerated students to be, as Rodney Spivey-Jones said, “civic beings.”

This is the promise of a liberal education: It connects us to humanity—our own and the whole of it beyond ourselves. Liberal education sets a course toward flourishing by inviting us to partake of our cultural inheritance of ideas handed down through the generations, by interrogating the forces that shape the world and the individuals within it, and by considering the stories that help us make sense of it all.

For human beings who’ve been locked in prison for years, even decades, that sense of connection can be deeply transformative. “People on the outside don’t really understand what’s involved when you completely lose your liberty,” Anthony Annucci, acting commissioner of the New York State Department of Corrections, says in the miniseries. As one inmate put it, an incarcerated man feels like society is “against” him, like he’s not a real member of society anymore.

Education can help prevent that disassociation and alienation. Talking to Rolling Stone magazine, executive producer Ken Burns says, “When Thomas Jefferson said, ‘life, liberty, and the pursuit of happiness,’ he wasn’t after material things in a marketplace of objects. He was after lifelong learning. I think what College Behind Bars suggests is the power of education.”

Educational programs like the Bard Prison Initiative are not without detractors. College Behind Bars explores the complicated politics behind funding for in-prison education programs. Corrections commissioner Anthony Annuccio also discusses resentment among corrections officers, most of whom don’t have college degrees.

And of course, University of Cambridge-based program Learning Together—whose motto is “Education as the practice of freedom”—faced serious scrutiny and skepticism after former prisoner and program student Usman Khan killed two people on November 29 at a Learning Together event in London. It is perhaps worth noting that two other former prisoners, including one convicted murderer, were among those who ran to help the victims and subdue the attacker.

Sebastian Yoon, one of the inmates profiled in College Behind Bars, was 16 years old when he went to prison in 2006. While pursuing his B.A. through the Bard Prison Initiative, he has the word “Reason” taped to his cell wall. Yoon says that when he’s reading books or writing essays, “the walls, they disappear. They dissipate. And I’m in my zone. I’m reading about Kierkegaard. I’m learning about history, memory. And I become free.”

Yoon was released from prison earlier this year.

I am President and CEO of the Institute for Humane Studies (IHS), which works with scholars who advance a deeper understanding of ideas in the classical liberal intellectual tradition.