After serving 22 years in prison, he is making up for lost time, with a job at the Ford Foundation, good coffee and a long soak in the tub. 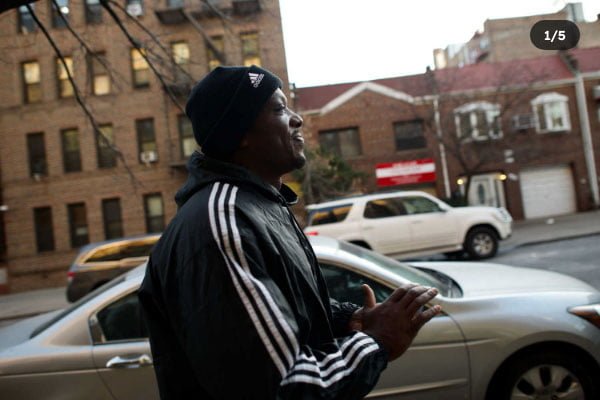 Few people know the joy of a free Sunday like Jule Hall. For 22 years he didn’t have one.

In 1993, Mr. Hall, then 17, was involved in a gunfight in Brooklyn, when a bullet fired toward him killed his neighbor instead. Tried as an adult for his involvement in the fight, Mr. Hall was convicted of second-degree murder and sentenced to life in prison.

Mr. Hall is the first formerly incarcerated person to be hired full-time by the Ford Foundation, where he works as a program associate, developing strategy and analyzing data for grants to advance, gender, racial and ethnic justice. He lives alone in an apartment in Sunnyside, Queens, which he chose for its proximity to the foundation, just across the East River.

A QUIET START I allow myself to sleep no later than 7:30, because on a weekday I get up around 5. I’ll get up and just sit in silence in my apartment. I’ll take care of the preliminaries, brush my teeth, get dressed, and I shoot straight to the Starbucks two blocks away.

SAVOR I usually order a venti Pike, not too strong. Prison has the worst coffee, oh, my goodness — that’s one of the things I think anybody would tell you. And because the coffee’s so bad, we overcompensate with sugar or creamer. So, to savor this rich, hot drink in my hand is so fabulous — with cinnamon, not too much sugar.

CAST OF CHARACTERS I’m ashamed to say this, but I people-watch. Starbucks is a place where people don’t notice each other; they’re more focused on their computer or their phone. People walk around with these frowns and I’m like, “Why are you frowning?” People bring their children in there, and I find myself so caught up in the little kid who gets the piece of paper on the back of his shoe and trying to make his parents aware. Of course, I recognize where this comes from: I wasn’t around children for 22 years.

FUEL After Starbucks, I’ll go home — I’m usually hungry by then. I’ll fix me a scrambled egg with a cinnamon raisin bagel in my toaster. While I have little tastes for things, I don’t make an elaborate breakfast.

A VIEW FROM THE BRIDGE Once I put something in my stomach, I bike ride. They have the bike path right on the corner that leads all the way to the East River. It’s about two miles away. So I pedal pretty forcefully to get a workout. Mostly I stop at Queensbridge Park, but there are times when I ride the bike lane all the way to the end of Astoria. But I also look at the Manhattan skyline. Now that I’m thinking about it: more often than not, I’m recognizing that the Twin Towers is not part of that skyline anymore.

WASHER WARS After that, I will follow that bike lane back home and do my laundry. I’ve got to say, this is the worst part of Sunnyside: it’s very competitive. I have to really compete with mostly older women to get my clothing washed. While my clothes are in the washer, because it’s right across the street from me, I’ll run back upstairs and start cleaning my apartment for the week.

LAVENDER AND TRAP I will either boil water or run a bathtub because on Sundays, I love to take a hot bath, with lavender Epsom salts. There’s not many bathtubs that can accommodate me, but I have a bathtub that partially can, as long as I put my legs up on the wall. I sit in there for about 30 minutes with my phone on the side playing music. I’m trying to act younger than my age, so I sometimes listen to trap music. But I usually put on jazz or R&B.

GLOBAL DINNER SCENE I eat out on Sunday — another thing I’m privileged to do because of my job. There’s Filipino food, there’s Indian cuisine, there’s Turkish cuisine, there’s Asian food, there’s Greek restaurants, there’s a diversity. My colleagues are aware of different types of cuisine and restaurants and whenever we travel together for work or have a lunch together, there’s this tendency to talk about food and wine. Now, I still haven’t taken to wine. Or sushi, for that matter.

SERIOUS READING I don’t watch TV. That’s another thing I think is a spillover from prison: I saw the television as a space of conflict because people would argue over what to watch, so I stayed away from it. I may watch Netflix, but I generally just read. I have to read a lot for work, so whether it’s grants or theory-related — and I mean, it’s great reading, but it’s not like Walter Mosley or some of those things I became fond of. I go to bed around 9 or 10.