In our field – since the evisceration of education in prison in the mid-1990s – the fundamental goal has been the restoration of baseline public funding for college-in-prison.

This is a generational victory.

It’s not just about money. Most of all, the elimination of college 25+ years ago sent a clear message that the government had no regard for the fate or future of incarcerated people; that prison should be as cruel and destructive as possible. It coincided with dramatic divestment in CUNY and SUNY, investment in prison building, and neglect of spending essential to Black and Brown communities statewide.

The win is possible because of the work of thousands of incarcerated students and alumni, advocates, formerly incarcerated people, religious communities, educators, supporters, and friends. The #TurnOnTheTAPNY Campaign and our friends at College & Community Fellowship deserve special credit.

So does Governor Kathy Hochul, whose leadership got this done.

With so much uncertainty in our politics today, and fear that the cruel politics of the 1990s may return, we should celebrate this victory as proudly as possible.

Let’s hope this reversal heralds a wide-ranging reimagining of what justice and education in the 21st century can be. 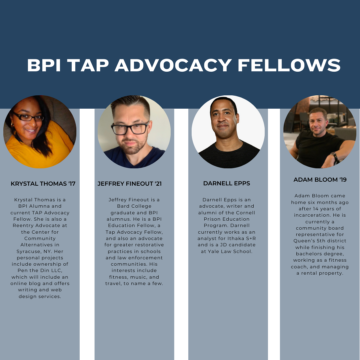