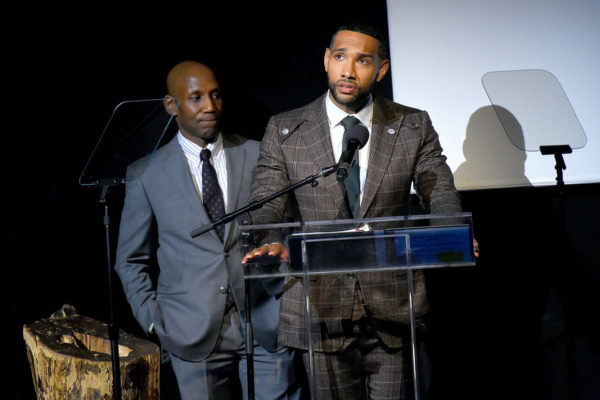 Dyjuan Tatro speaks at a special screening of “College Behind Bars” at the Apollo Theater in New York on Nov. 12, 2019. | Ben Gabbe/Getty Images for Skiff Mountain Films)

Dyjuan Tatro grew up in a poor neighborhood in Albany, N.Y., where gunshots were common and education inaccessible. Around 10th grade, Dyjuan dropped out and was selling drugs. A few years later, when he was 20, he was involved in a shooting and sentenced to prison for assault.

Thankfully, that was just the first chapter of Dyjuan’s story. While incarcerated, Dyjuan was able to access the education he had missed as a teenager. He was accepted to the Bard Prison Initiative’s postsecondary education program, where he joined BPI’s debate team — which drew national attention after defeating Harvard University. By the time Dyjuan got out of prison, he had finished a mathematics major and earned a bachelor’s degree from Bard College. Today, he works as a government affairs and advancement officer for BPI.

But the recidivism rate is far lower for prisoners who are able to get some postsecondary education while in prison. Fewer than 3 percent of graduates of BPI, which is based in New York, return to prison. In contrast, well over 30 percent of individuals released from the New York Department of Corrections and Community Supervision return to custody within just three years. Other colleges with similar postsecondary education programs for prisoners also boast lower recidivism statistics than their state averages.

Providing education to the incarcerated is a win-win — it reduces future crime rates and saves public funds that otherwise would be spent keeping people in jail or prison.

Unfortunately, however, Dyjuan’s ability to access a postsecondary education while incarcerated is far from typical. The 1994 Violent Crime Control and Law Enforcement Act rendered anyone behind bars ineligible to receive federal Pell Grants. These grants, which give impoverished students financial aid for postsecondary education, had long been a critical funding mechanism for in-prison college programs. The Pell Grant ban put a virtual end to postsecondary education for prisoners who weren’t able to take advantage of privately funded programs like Bard’s or who didn’t have greater familial financial support.

This situation remained largely unchanged until the announcement of the Department of Education’s Second Chance Pell Pilot Program in 2015. By expanding educational opportunities for some people behind bars, the program aimed to help individuals returning home acquire work, financially support their families and claim a second chance for a better life.

While at least part of the improved recidivism rates depends on personal characteristics of the people who seek out educational opportunities, the findings of multiple studies that attempt to account for these differences reinforce the conclusion that investing in postsecondary education for prisoners is one of the smartest ways to increase safety in our communities.