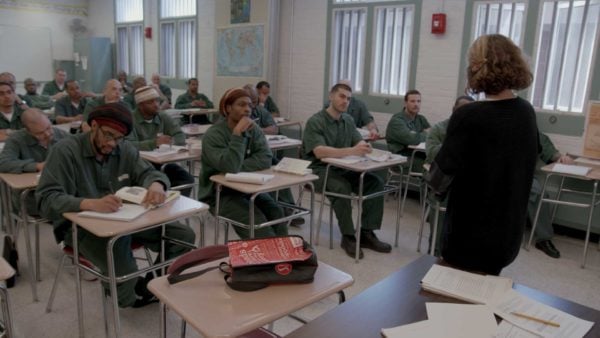 It’s a common nightmare for anyone who attended college: just as you’re preparing to sit down to write your undergraduate thesis, you reach for your notes — the culmination of months and months of research — and they’re gone. Completely disappeared. But in most of these dreams, the notes are just missing. They’ve not been confiscated (and then conveniently lost) by prison officials.

This is just one of the many little moments in “College Behind Bars,” a four-part, two-night documentary series by Lynn Novick, that establishes the inherent tensions between existing as both a prisoner and a student. Throughout the series, we’re introduced to incarcerated men and women across a series of New York State correctional facilities who are enrolled in the free Bard Prisoner Initiative (BPI).

Novick is probably best known for her work with renowned documentarian Ken Burns, who serves as this series’ executive producer; on past collaborative projects, she often handled the task of conducting interviews. Her ability to secure a revealing, thoughtful interview is on full display in this series — especially in the first episode, during which inmates explain how they entered the prison system and what led them to enrolling in college-level courses.

These stories are intermingled with the history of the BPI program, and it’s a deliberately slow start (one that, for what it’s worth, feels very on-brand for PBS) that sets a solid foundation for the three subsequent parts. Novick uses the inmates’ narratives as a way to gently enter into big-picture topics like recidivism, mass incarceration, and rehabilitation, parsing through the public politics of prison and revealing the deeply human stories within.

“College Behind Bars” spotlights the euphoria of its subjects’ academic accomplishments — like watching one student begin to grasp intermediate Mandarin — without turning a blind eye to the horrific acts that led them to prison, nor ignoring the often difficult home lives and traumatic experiences that informed their decisions. It makes a compelling case for the benefits of higher education in a prison environment, allowing participants to both mentally move beyond their pasts while also carving out future opportunities.

A set of voices that’s missing from Novick’s series is that of the prison guards; the union that represented them didn’t want them to appear in the docuseries, and their appearances are blurred. Their presence is definitely felt, though. There’s an instance when a prisoner is charged with incitement, and subsequently put in solitary confinement, after his creative writing assignment is found to contain violent rhetoric. He was essentially punished for completing his homework.

One of the strongest elements of “College Behind Bars” is that it assesses all the complexities of education in the prison system. There’s nothing simple — or even particularly feel-good — about the docuseries and makes it clear that college classes aren’t an immediate fix for the prison industrial complex, systemic injustice, and mass incarceration. But one thing that’s made clear is that education shouldn’t only be a privilege for the wealthy, and that programs like BPI allow inmates access to opportunities they didn’t otherwise have outside prison walls.