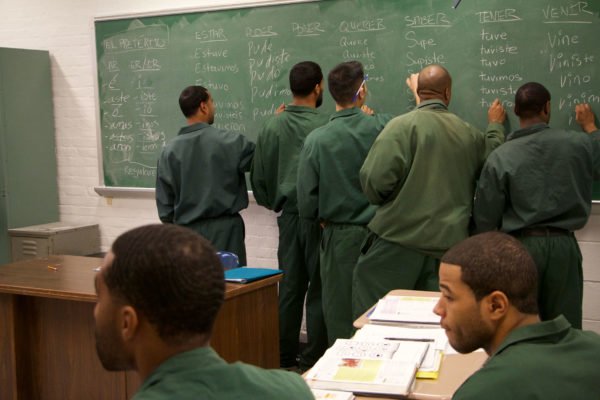 Should prisoners get the chance to take college courses while serving time?

Seems like a fine idea to me, but my heart tends to be big on these kinds of issues. Americans, in general, have frowned on it: The sweeping Violent Crime Control and Law Enforcement Act, which became law in 1994, stripped federal funding for many such programs, which vanished as prisons grew increasingly crowded and corporately ­managed.

For years, politicians have successfully argued that taxpayer dollars shouldn’t help convicted criminals earn degrees — especially if other law-abiding citizens aren’t able to afford college. That logic leads to further inequity, in which working- and middle-class people on the outside can go to college so long as they can shoulder a lifetime of debt. It’s a kind of prison sentence either way.

In PBS’s “College Behind Bars,” an inspiring, four-part documentary from Lynn Novick (“The Vietnam War”) that airs Monday and Tuesday, viewers are taken inside the Bard Prison Initiative (BPI), which offers a rare opportunity for select inmates in New York’s state prison system to enroll in the same rigorous curriculum taught by the same professors at Bard College’s idyllic Dutchess County campus, where tuition alone runs $55,566 per year.

Of the state’s 51,000 male inmates and 2,400 female inmates, only 300 get to participate in Bard’s program, which is paid for by the college, largely through private donations — a salient detail that I hope will calm the irritable tax cranks long enough to consider BPI’s extraordinary successes. Of its graduates, recidivism (the number of inmates who return to prison after parole) is down to 4 percent, compared with a 50 percent rate overall.

Yet, as we see in the film (which is executive-produced by Ken Burns and produced by Sarah Botstein), there’s a simmering resentment against these students — starting with the scorn from corrections officers, none of whom could or would participate in the film (and thus have their faces blurred). As a prison official notes, many of these guards might have liked to go to college themselves, but never got the chance. It can be galling to watch a group of inmates spend part of their days debating gene therapy in a philosophy class, or parsing “King Lear” in English lit, or brushing up on their intermediate Chinese.

Some limelight came for Bard’s student inmates in 2015, when their debate team beat Harvard’s — news that went viral. It got people interested again in the broader benefits of such a program. As one of the inmates in the program points out, it’s called the department of corrections. What’s more corrective than learning?

Their lives as students are far from ideal or cushy. The inmates note their past failures in the classroom and in life (many are in for murder or manslaughter). Those who grew up in and around New York City attended some of the system’s worst public schools, in communities that discouraged them from pursuing good grades. They enter the Bard program still struggling to write a cohesive paragraph or make sense of the first page of a reading assignment, “doing their best to be brave in the face of probably some of the hardest material they’ve ever encountered,” says literature professor Christina Mengert.

Ever wondered whether a prison sentence might, at least, be the place you finally finish reading “Moby-Dick”? Well, rest uneasy, because the environment is hardly conducive: At the Eastern Correctional Facility, a maximum-security men’s prison, classes and studying are frequently interrupted by mandatory population counts — as many as five per day. The students must protectively hoard their books and learning materials in cramped cells (sometimes just a cubicle with a bed) and can use computers only to type papers, because the Internet is off-limits.

Still, serious scholarship gives them a sense of identity they’d never had before; as Novick’s camera reveals over time, the knowledge they acquire makes them stronger, fuller people and engaged citizens. Indeed, they become even more remorseful about their crimes, with increased empathy for other people and a greater understanding of the human condition. One inmate, John Gonzalez, is astonished to finally “put words to things” he knew all along: “Hegemony. Alienation,” he says.

Novick’s patience is rewarded with the chance to chronicle some outcomes, a couple of which are a bit tragic. Inmates who commit infractions lose their Bard spots; they can spend years trying to get back into the program. Others have futures that turn out more happily than a viewer might guess, including gainful employment after parole.

It’s especially fascinating to watch two students in particular — Rodney Spivey-Jones and ­Sebastian Yoon — as they shape their complicated senior theses into works that impress a committee of their professors, who praise both for their intellectual discipline and insights.

Perhaps this is what so aggravates opponents of the idea: the sight of these men overachieving and the personal freedom that knowledge bestows. Even within a cell, Yoon observes, he can read Kierkegaard and experience a form of liberation — something beyond the walls, beyond himself.

College Behind Bars (two hours) begins Monday at 9 p.m. with Parts 1 and 2 on WETA and MPT. Parts 3 and 4 air Tuesday. For streaming, visit pbs.org.