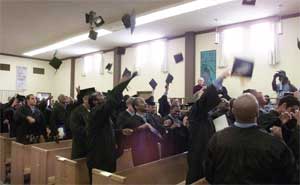 Until 1994, the U.S. federal government supported nearly 400 “college-in-prison” programs. But that all changed when President Bill Clinton signed the Violent Crime Control and Law Enforcement Act that year, cutting off federal support and funding for the programs. Pretty much overnight, the programs disappeared.

The New York programs endured a degree of devastation typical among the 50 states. In April 1994, each of New York’s 70 state prisons had a college within it; by that September, none did.

A handful of privately funded college-in-prison programs have begun filling the void left behind. One of the most notable of these programs is the Bard Prison Initiative. Established in New York in 1995, the initiative runs “colleges” in five state prisons, enrolling about 200 incarcerated students — women and men — full time in a rigorous liberal arts curriculum and awarding both associate and bachelor’s degrees.

Max Kenner, who spearheaded the initiative while a student at Bard College and who took over the program’s leadership upon graduation, spoke to a RAND audience about his experience in offering college courses in prisons.

The demise of public funding for college-in-prison programs coincided with a larger nationwide shift toward incarceration at the expense of public education, according to Kenner. “In the decade when I was in high school and graduated from Bard, the state of New York divested $350 million from its budget for public education and invested all that — plus $100 million more — in the state prison system.” To Kenner, the shift reflected a growing public cynicism about young people’s ability to mature, learn, and change.