BPI stands together as a community in defense of Black lives and in struggle for racial justice. Read our full statement here

This 4 part doc series explores New York State’s college degree program, BPI: Bard Prison Initiative. We follow a group of students as they make their way toward graduation. I say students and not inmates because when they are in class, they are students. While we as an audience are eventually privy to the subjects’ backstories, BPI as a program does not focus on why each individual is imprisoned. BPI focuses on their education.

This series is about humanity and ambition. These men and women are striving to better themselves and escape the environment they have, in most cases, created for themselves. The series also addresses the very real statistic that socioeconomic circumstances oftentimes lead to a life of crime. Inmates are not afforded the rights and freedoms of the average American. They must contend with the chaos of prison while engaging in a vigorous Bachelor’s degree program. College is difficult enough without being constantly interrupted by lockdowns, race wars, or the ultimate chaos of being surrounded by mental illness and other inmates in general.

The admissions process is cutthroat. It is based on an essay and an interview. It begins with an AA and then an even luckier few continue on to the BA program. Students are studying things like Plato, Mandarin, Debate, and Calculus. They are earning their degrees in the same way any other student would outside prison walls. Professors do not give pass/fail grades. They are legitimately working with each individual just as they would at a stand-alone university. This is a college that just happens to be on prison grounds. Before they graduate, they must submit a senior project. The paper must be between 80-100 pages. It is the equivalent of a Master’s thesis.

The series makes an interesting case for free college for all throughout the country. It’s an intriguing commentary on the misconceptions about who deserves an education. Shouldn’t it be a right? It should not belong solely to the lucky few, the wealthy, or the white population. Losing your liberty should not mean losing your right to an education. If anything, education has been proven to lift people out of poverty and violence. The political hockey puck that this type of program has become since it’s inception in the 90’s has seen taxpayer dollars bounce in and out of the system. Resentment permeates the perception of the system by politicians to everyone from the prison staff to voters. Even though it actually monetarily benefits the taxpayer in the long run. Would you rather pay for an inmate to learn or sit inside a cell? Guess which one actually costs less.

College Behind Bars puts faces and voices to those benefiting from but genuinely fighting to improve their lives and thus, the world all we live in. We, the viewers, are forced to come to terms with the prison industrial complex, systemic racism, and our own moral compass. And the students are forced to come to terms with their pasts and their futures. College Behind Bars is both informative and eye-opening. It breathes life into the stories of a population oftentimes swept under the rug. You will cheer on the college students, no matter what your views on how they got their opportunity to learn and earn their degrees.

Every gift counts at BPI!
Please consider making a gift to support our work. 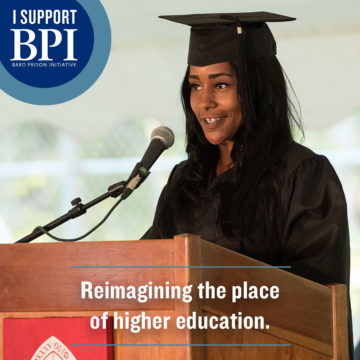 Join us in shaping the future of access to higher education as we continue to defy expectations of who college is for and where it might lead. Give today!