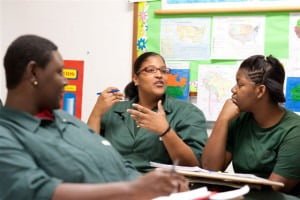 It sounds like a storyline out of Hollywood. A group of convicted inmates from the Eastern New York Correctional Facility, all of them participants in Bard College’s Prison Initiative, challenge Harvard University’s national championship-winning debate team. The inmates, who research without the Internet (because it’s not allowed), and wait weeks for the books they need to be cleared by security, win.

But it’s not a movie. It’s what happened in mid-September on a prison stage in front of more than 150 spectators and a panel of national college debate judges.

Max Kenner is executive director of Bard College’s Prison Initiative, which has granted more than 300 undergraduate degrees over the last 13 years. He joins Here & Now’s Robin Young to discuss his students and the issues surrounding the country’s inmate education initiatives.