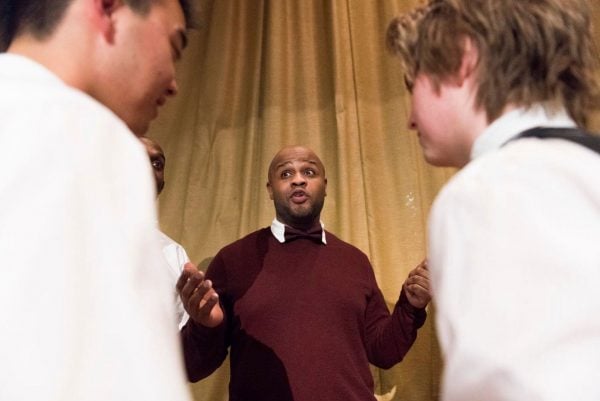 The three students from the University of Cambridge, wearing black suits and clutching sheaves of papers, stepped onto the wooden auditorium stage under the warm yellow lights. As members of a storied debate team, they had competed the world over but never in a place like this — a stripped-down hall in a maximum-security prison in Upstate New York that looms among the Catskill Mountains like a medieval castle.

In the center of the stage, three men wearing state-issued green pants and bow ties they had borrowed from their fellow prisoners stood ready to greet their privileged opponents. Only one of the inmates had finished high school before entering prison.

Reggie Chatman, a round-faced, fast-talking 39-year-old who has been imprisoned for murder since he was barely 18, grinned as he reached to shake hands with his Cambridge competitors. Once again, he and his teammates were about to attempt what, to an outsider, might seem impossible.

Yet it was here in 2015, at Eastern New York Correctional Facility in Napanoch, N.Y., that the prison’s debate team competed against Harvard — and won. The inmates’ underdog victory against the Ivy League school made international headlines, drawing attention to the need for inmate education programs like the one that produced the Eastern team, the Bard Prison Initiative through Bard College.

The debate team has since become a powerful symbol of personal redemption and penal reform. Friday’s debate came amid growing momentum for prison education; earlier this month, a group of bipartisan senators reintroduced a bill that would restore Pell Grant eligibility to incarcerated students.

But this time, the inmates were going up against one of the oldest and arguably the most prestigious debate teams not just in the nation but the world — a 200-year-old institution that has hosted speakers the likes of Winston Churchill, Ronald Reagan, Stephen Hawking and the Dalai Lama. Read more.

Photo caption: Reggie Chatman, 39, chats with Andrew Tang and Christoph Marshall, who are part of the debate team at the University of Cambridge. Chatman, who is on Bard College’s prison debate team, thanked them “for taking us seriously.” (Michael Noble for The Washington Post)