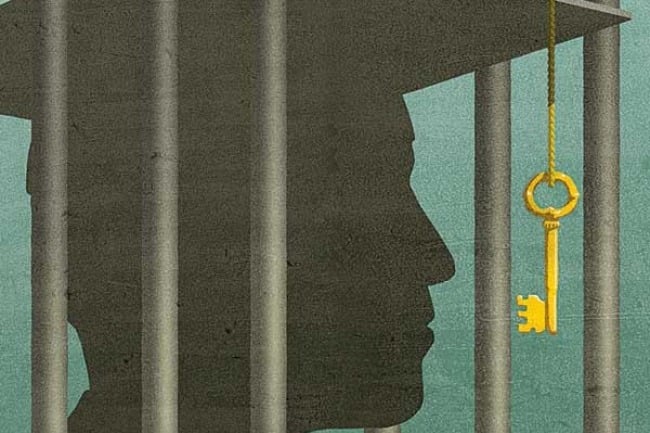 Jonah lives in a correctional facility in upstate New York, where he is serving a sentence of 12 years to life on a felony conviction. While others spend time lifting weights, Jonah reads W.E.B. Du Bois and John Dewey, studies genetics, and wants to find time to read Walter Isaacson’s biography of Albert Einstein. His friend Damian is finishing his senior thesis on the conservative tradition in American political thought. Both men have dates with the parole board in the next few months. Having already earned associate degrees, and well on the way to their bachelor’s, they hope their academic accomplishments will help them win release (although there is no guarantee that will be the case). They are eager to join some of their already-released college friends now working in jobs ranging from serving as a counselor for AIDS patients in New York City to managing a waste-treatment plant in Westchester County, N.Y.

Jonah and Damian are among the more than two million men and women behind bars in America. Like them, most incarcerated individuals are likely to be released and to return to their old communities. Thanks to their prison education, Jonah and Damian have a good chance of doing well once they go home.

The same is not true for many of their prison peers. We must ask ourselves: Would we rather help those we incarcerate build constructive lives, or have them return to prison—as more than 50 percent currently do?

The answer seems self-evident: Prisons are a drain on national resources. Last year prisons cost the nation upward of $55-billion, which exceeds the Department of Defense’s 2011 spending request for the war in Iraq. The waste in human resources is staggering. Beyond whatever talents prisoners themselves possess, children of prisoners are more likely to end up in prison, too. It is urgent that we find ways to help more people leave prison ready to work and to contribute positively to their families and communities.