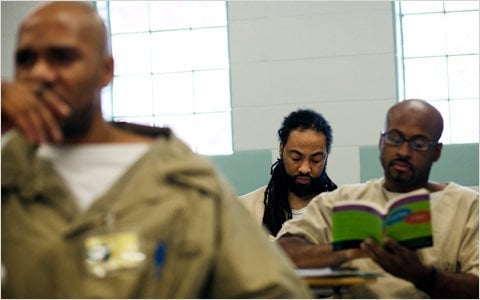 CHESHIRE, Conn. — In many ways it was just another day, another class of Wesleyan University, one of the more selective colleges in the Northeast. The topic was multiculturalism in schools. The discussion focused on methods of evaluating the rhetorical skills of various commentators, from Arthur M. Schlesinger Jr. to Dinesh D’Souza.

One student pored over the text, his glasses perched at the tip of his nose. Another raised his hand again and again, eager to speak. A third lobbed grenades into the discussion. Several worried aloud about their homework, a research paper due in a few weeks.

Unlike other Wesleyan classes, though, each of the students — all men — had numbers like 271013 or 298331 on their khaki shirts. They were, in fact, inmates at the state prison here and all part of a daring, privately financed experiment in higher education that takes murderers and drug dealers and other inmates with histories of serious crime and gives them an opportunity to get an elite college education inside their high-security prison, the Cheshire Correctional Institution.

Though community colleges and others, like Boston University, have long had inmate programs, the two-month-old Wesleyan program is one of a few in the country where the selection process is highly rigorous, where academic potential is the primary criterion and where past criminal conduct, however heinous, is not considered in admission.