PBS documentary shows how higher education helped me remove the shackles of incarceration. College degrees in prison can do the same for others. 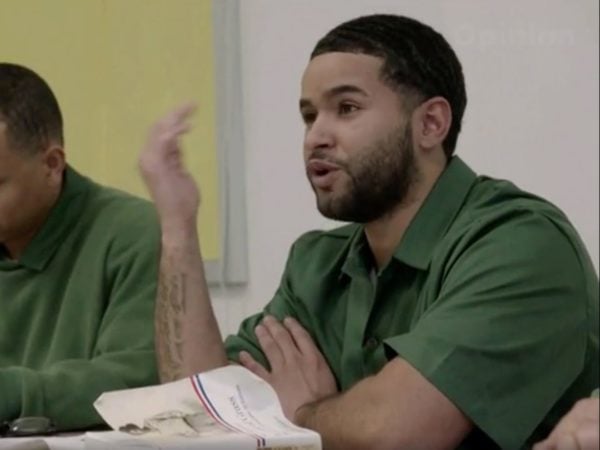 Giovannie Hernandez spent more than 11 years in prison. He graduated from the Bard Prison Initiative, and was released from prison about three years ago. Credit: PBS/Skiff Mountain Films

I am choosing to publicly out myself as a convicted felon in this column. Let me tell you why. In March of 2005, when I was 16 years old, I was arrested for my involvement in a fatal street fight. I was incarcerated for 11 years and 6 months. While in prison, I earned a GED, completed vocational training and satisfied other mandatory programs. None of this was as meaningful or as transformative as my pursuit of higher education.

For most, prison is an experience without purpose. It is traumatic, exhausting and emotionally and physically damaging. Because our criminal justice system prioritizes punishment over genuine rehabilitation, prison often does not adequately prepare people to return to society. But I got lucky. While incarcerated at New York’s Eastern correctional facility, I was able to attend college through the Bard Prison Initiative (BPI). It was one of the hardest challenges of my life. I took the same classes as students at Bard College — a private, liberal arts school in Annandale-on-Hudson, New York.

My educational experience before then had been almost entirely prescriptive. I knew school as a place where educators told me what to memorize, what to think, what to know. It did little more than make me a passive learner, a receptacle for information.

In the coursework, I found myself. My professors required me to develop my own opinions about history, literature, philosophy and science. My real education started with a simple yet profound question: What do you think?

In many ways, my academic journey was like emerging from Plato’s cave. Just as the cave dwellers — who were hindered by physical chains — could only interpret shadows as reality, my way of thinking about the world had created mental, emotional and psychological chains that, in part, put me behind bars. Education helped me begin to unshackle them.

Each semester in the program brought new challenges — new essays to write, new concepts to grasp, new themes to explore. Each course I took brought me further out of my proverbial cave and closer to a real understanding of myself and the world. My education trained me to think critically, to challenge conventional wisdom, to spot inconsistencies, to interrogate my own opinions and ideas.

For the first time, I understood the social, racial, economic and historical factors that had shaped our country and impacted my life. The fuzzy picture of my life had finally come into focus. It was not a pretty sight, but the clarity allowed me to move forward with intention and purpose. And because I better understood how the world worked, I felt much more a part of it.

But more poignantly than that, getting an education inside prison brought me closer to my family on the outside.

My sister and I attended college at the same time. We often discussed our classes and struggles. Sometimes we competed over grades. Being in school gave us a mutual experience that we could bond over, and those are rare occurrences in prison.

My sister wasn’t the only member of my family who supported me. Getting a degree in college was as much about them as it was about me.

I have been out of prison for more than three years; my liberal arts education contributes to my successful reentry every day. My understanding of history, literature and politics allows me to interact confidently and capably with people from diverse backgrounds. I work as a case manager for the Brooklyn Community Bail Fund, where I am better able to communicate with and advocate for my clients because BPI taught be how to be a resilient, tenacious and compassionate thinker.

I absolutely deserved to face consequences for my actions — and I live every day regretting the choice I made in 2005 and atoning for the immense pain I caused. But I also deserved a real opportunity to grow and to become a better person. In the U.S., 95% of people incarcerated in state prisons will eventually be released — and we as a country have an obligation to them, their families and their communities to ensure that they return able to contribute positively and meaningfully to society.

Giovannie Hernandez is a graduate of the Bard Prison Initiative and currently works as a client services associate at the Brooklyn Community Bail Fund. He is featured in the documentary “College Behind Bars,” which will be shown on PBS on Nov. 25 and 26.